Finnish Lapphund dogs are renowned for being smart, friendly and alert. The Finnish Lapphund is the perfect family companion. Boasting an active personality and an intelligent mind, they are lovable and very affectionate. Put simply, this is a home dog which just loves its owner and enjoys being surrounded by a loving family.

The History of the Finnish Lapphund

The Finnish Lapphund was originally kept by the semi-nomadic people while inhabiting the far reaches of the Arctic north, Lapland and Finland. The primary role of the Lapphund was to help its owners herd reindeer, but the invention of the snowmobile ended this tradition.

It wasn’t until the 1940s that interest in preserving the breed led to the writing of a new breed standard, which was eventually accepted by the Finnish Kennel Club in 1945 when a breeding programme was introduced.

A Finish Lapphund dog is renowned for being:

The Lapphund breed is quick, crafty and can be quite noisy when they need to be, a throwback to their original function as herders of reindeer.

However, while a Lapphund dog is happy to be controlled, they are also a calm breed which is surprisingly submissive and friendly despite their past. Sometimes a little shy in front of people they don’t know, they are not renowned for being aggressive. But if you don’t want them to annoy your neighbours with their loud voice, you’ll need to train yours when it’s okay to bark and when it’s not. Finnish Lapphund’s tend to bark frequently, so expect to have lengthy conversations with your talkative dog!

Because the Finnish Lapphund is energetic, you should plan to exercise them for at least 20 to 30 minutes once a day, more if possible. They love a good walk or run, or even a hike. Fortunately, after a good walk and a game of ‘fetch’ they will be more than happy to chill out in front of the TV for a few hours. 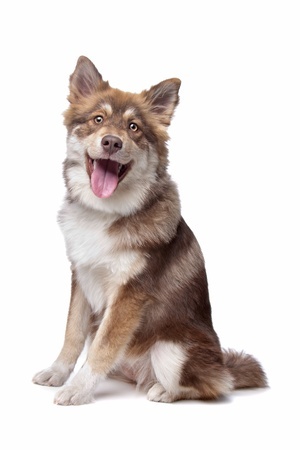 If you’re looking for an energetic playmate for your little ones, you’re also in luck as this sturdy dog is the perfect gentle giant to provide your kids with endless hours of fun.

It is recommended you begin training your Lapphund as early as possible because even at eight weeks old they are believed to be capable of soaking up knowledge and learning.

The Finnish Lapphund is a medium-sized dog with long hair. Their long-haired fur type means they do require good grooming sessions to keep them clean and their hair healthy. As a dog historically from the Arctic north, Lapland and Finland, they look like a typically northern breed with a friendly, wolf-like look.

How to groom your Finnish Lapphund

The Lapphund has an extremely thick coat which sheds seasonally and will therefore require regular brushing in order to keep flying fur well and truly under control. Try to brush their coat on a weekly basis to keep it clean and remove any dead hairs.

Trim their nails as needed, probably every few weeks or so, and be sure to keep their ears squeaky clean and dry to prevent any nasty infections. You should begin grooming your Finnish Lapphund from a young age, so they understand this is a normal part of life. Grooming and bathing your dog is an important part of ownership.

What is a Finnish Lapphund’s life expectancy?

Finnish Lapphund puppies are well-known for resembling cuddly, fluffy little bears! They can have pointed or folded-over ears and can sometimes look as though they are constantly smiling due to their fur markings and mouth positioning.

If you are thinking about adopting a Finnish Lapphund puppy into your family, you can start training them almost straight away. The younger you train them, the more well-behaved they will be. This breed can sometimes be a little shy as a puppy, but once they get to know you, they are submissive in the home and very friendly.

For more information about different animal breeds, you can head to our We Talk Pet blog where you will find more breed reviews and dog ownership advice.