With its black patent-leather like coat and copper eyes, the Bombay Cat was a show-stopper as soon as it hit the professional circuit. Possessing good looks combined with great personality, it’s easy to see why this breed is so popular. 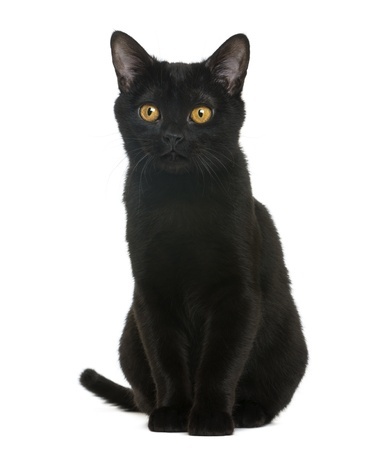 Through breeding a Black American Short Hair with a Burmese Cat in the 1950s, American breeder Nikki Horner was able to gradually develop a breed of cat that looked like what she called a “parlour panther” which was her precise aim.

Horner was inspired by the Black Leopard of India but her hybrid breed has absolutely no wild blood in its veins. Its name, however, was borrowed from its Indian relative.

This beauty is recognised by breeding and showing bodies the CFA, ACFA  and TICA.

Appearance of the Bombay Cat

Just a glance at the Bombay Cat makes it obvious why its nickname is “the patent-leather kid with the new-penny eyes.”

The coat has a shine that gives the appearance of it having been massaged with exotic oils. Its eyes are round and bright gold and seem to take in every single move around it. Its body is muscular yet sleek, giving the impression that it’s as light as a feather however it actually has a pleasantly solid, packed feel; males weigh in at 12 pounds while females are about 8 pounds.

The black fur should be ebony to the roots with no discolouration or fading. 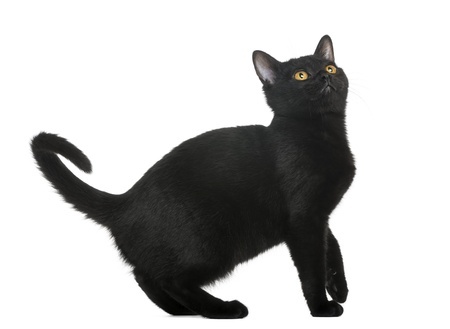 A true lap cat, the Bombay Cat loves people and gets on very well with kids. In fact, it isn’t as independent as most cats until it grows older and will tend to find an object of affection and stick to that person while still being affectionate with everyone else.

It gets on very well with other cats and will snuggle up with them pretty quick! These cats don’t really enjoy being left alone for a long time though as they crave attention from their owners.

The Bombay cat is as smart as a whip, cheeky as a monkey and chatty as a parrot so makes a playful, fun and engaging companion. A close look will reveal that it has a slight swagger in its walk like a panther!

Generally a healthy breed, the Bombay Cat can however have breathing problems owing to its short muzzle and teary eyes. It may suffer from hypertrophic cardiomyopathy which is an enlarging of the heart which is common in all types of cats. Its coat is easy to care for and a good, gentle brush every few days combined with a nutritious diet is usually enough to keep it looking perfect.