The Corgi breed are, quite literally, fit for The Queen. Famously a favourite of Queen Elizabeth II, Cardigan Welsh Corgi dogs and her Pembroke Corgis often join Her Majesty during public appearances. The Queen has favoured Corgis for more than 30 years during her reign and the animals have been depicted across the world in works of art and statues.

The Cardigan Welsh Corgi is the older of the two breeds and is believed to have existed in Wales for more than 3,000 years.

Cardigan Welsh Corgis usually grow to up to 12.5 inches tall, with males weighing up to 30lbs, while females are between 25 and 34lbs.

Cardigans have long and low bodies, which has earned them the nickname of ‘the yard-long dog’. The ears are upright and the tail is bushy like that of a fox. Cardigan Welsh Corgis’ tails are always long, whereas Pembroke Corgis can have tails that are bobbed or docked.

Cardigans can show in a range of colours such as red, black, blue merle and with or without tan. Unofficial colours include red merle. Corgis usually have white fur on the chest, muzzle and neck as well as the tip of the tail and on the head. Cardigans can have markings, such as a tick on the legs or on the muzzle. 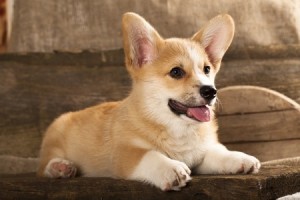 Cardigan Welsh Corgi dogs and puppies are known for being extremely loyal and affectionate. They love to play but need to be watched around younger children, as they have a tendency to bite if not trained well.

Corgis are naturally inclined to bite because of their heritage – they used to herd cattle by nipping at the lower legs.

Like all dogs, Cardigan Welsh Corgis benefit from being socialised in their early weeks, especially if being introduced to a family with children and other pets. Historically, Cardigans were used to herd cattle and their penchant for bossing bigger animals around makes them popular among horse owners, who use them to help get their mounts into fields or horseboxes.

Cardigan Welsh Corgis are perceptive and attentive, making them alert watchdogs. They are naturally wary of strangers and will more than likely bark whenever you get a knock at the door. Corgis’ loyal streak and sense of responsibility means they make good companions for older people, as Her Majesty will no doubt testify.

The breed has proved adept in competitions such as sheepdog trials, agility and obedience.

All Cardigan Welsh Corgi puppies are a pleasure to train because of their intelligence and benefits greatly from training at an early age.

How to look after Cardigan Welsh Corgis

Despite being a relatively small breed, Cardigans are highly active and very agile. Cardigans need good, thorough exercise on a regular basis. As long as they get it, they are happy living in almost any environment, even in small flats.

Cardigan Welsh Corgis have a thick double coat that sheds continuously, with spells of more intense shedding twice a year. This means they need a thorough dog grooming – a good daily brush through and plenty of baths to get rid of excess fur.

Nails will need clipping once a month. A weekly check of the ears to look out for signs of infection is also advisable. Brush your dog’s teeth regularly to prevent a build-up of bacteria and to keep them healthy.

When feeding Cardigan Welsh Corgis, aim for two meals of high-quality dry food a day. The amount your dog needs will depend on their size and how active they are. It’s important to keep an eye on your dog’s weight. You should be able to feel but not see the ribs and a slender waistline should be visible. Don’t give out too many treats and don’t be tempted to feed your Corgis your leftovers.

Do Cardigan Welsh Corgis have any common health problems?

Cardigan Welsh Corgis are generally a healthy breed but, like all dogs, are susceptible to some diseases. Because of their long shape, back problems are among the known issues, including damage to the spinal discs. Symptoms include unsteady walking, difficulty going up and down stairs or a reluctance to climb.

Cardigans have also been known to suffer from sight problems in older age due to gradual deterioration of the retina.

The most common causes of death are cancer and the life expectancy of the Cardigan Welsh Corgi is between 10 and 12 years.

In terms of pregnancy, litters typically comprise four to six Cardigan Welsh Corgi puppies, though the number of pups born can vary widely.

The breed descends from the same family that produced the Dachshund and Basset Hounds. The ancestors are thought to have been taken to Wales by Celtic tribes more than 3,000 years ago.

It is thought that the original Corgi was crossed with a Viking Spitz-type dog to produce the Pembroke Welsh Corgi. Later, Corgis became working dogs that helped farmers herd and protect cattle.

The breed’s association with royalty dates back to the reign of Queen Victoria. According to legend, she was helped by two Corgis who were magically produced by a fairy as Her Majesty’s path was blocked by a fallen tree. This is said to be why the breed is favoured by Queen Elizabeth II.