The Dalmatian is one of the most recognisable dog breeds, largely thanks to Disney’s enduring family favourite 101 Dalmatians.

The animated film was released in 1961 but Dalmatians have been capturing people’s hearts for centuries. Throughout history, they have served as hunting dogs in circuses and helping firefighters.

Back in the days when fire trucks were horse-drawn, Dalmatians would run alongside the carriage, protecting the horses from other dogs or animals that might spook them.

Nowadays, Dalmatians are fire station mascots, particularly in the US – or in episodes of the popular cartoon Fireman Sam.

Sleek and athletic, Dalmatians are recognizable because of their black spots on white coats.

Puppies are born all-white and spots tend to appear after the first month. The coat is usually short, fine but thick.

Dalmatian sizes are typically between 48cm to 58cm tall

Dalmatians are intelligent and sensitive. This means they need training in early life but do not respond well to harsh methods.

Dalmatians make good pets for active families. They will get along with older children and other animals in the house, especially if socialised as a puppy.

However, they are known to have low tolerance levels and might not be great with younger children. They are also exuberant animals and should be supervised closely when near small children to ensure they are not pushed over. 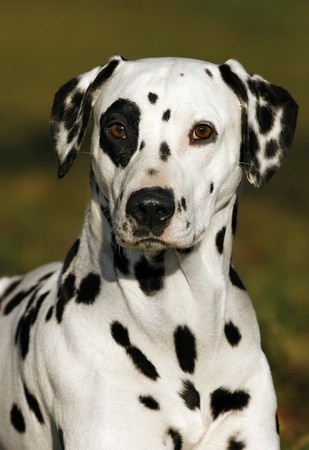 Dalmatians have plenty of energy and love to play. Their breeding means they can run for miles, so need regular and extensive exercise to prevent behavioural problems from developing.

Like most active dogs, they do not enjoy spending long periods of time alone.

Their coats shed all year round, so regular grooming (and vacuuming!) will be needed.

Dalmatians have a few special dietary requirements because of their unusual urinary system. They need plenty of water, high-protein food and will regularly need to urinate.

The typical Dalmatian life span is 10 to 13 years.

Deafness in Dalmatians is very common. A genetic trait that runs through the breeds bloodlines means that only about 70% of Dalmatians have normal hearing.