Instantly recognisable and celebrated for their show dog status, poodles are an incredibly popular dog breed.

It seems only natural that such an impressive-looking dog should have a notable history and the poodle originally hailed from Germany where it was called a Pudelhund, which translates loosely as ‘splashing about dog’.

This name provides a big hint about the poodle’s early function where it worked as a water dog retrieving fowl from lakes and rivers. Its later popularity in France led it to becoming the country’s national breed and it was much loved amongst the nobility of Spain too.

In fact, this dog was extremely popular around mainland Europe before it was known in the UK and the Standard breed, which was bred down to the smaller Miniature and Toy, was the first poodle type.

Poodles come in three varieties: Toy, Miniature and Standard (ranging in size from the smallest to the largest respectively). The coat of the poodle has a dense, curly texture with hues that include black, gold, brown, grey and white which means many are mixed in colour.

This well-proportioned dog has oval-shaped, dark eyes and a friendly, alert-looking face. Ears are folded over and the length form the chest to the rump should be approximately the same distance from the ground to the shoulders – if looking for the most handsome look. 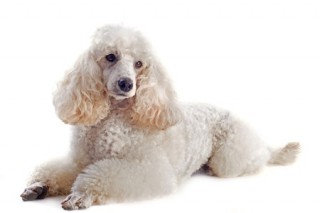 Toy, Miniature and Standard poodles are all fabulous family dogs because they love people. The latter is especially good with children owing to its patient character but all poodles tend to have sunny, curious natures and live happily with other dogs and cats as long as they are introduced to one another carefully and gradually.

It is worth noting that poodles do need regular attention and become vocal if they are left alone for too long. The range of sizes means that the poodle can adapt to both small flats and homes with plenty of space to roam while this dog’s intelligence and good nature lend themselves to easy training and means they appreciate a firm owner.

The amount of exercise a poodle needs varies depending on its size. Large Standards unsurprisingly need a fair amount of physical activity in order for them to be at their best in both body and spirit. About two hours a day divided into different sessions should be sufficient.

Toy and Miniatures do not require the same amount of exercise but do have a lot of energy which they need to release. They love going out with their owner for a quick walk and enjoy playing within the home too so it’s important to invest in a few toys.

Serious exercise must not begin until all poodles reach maturity as their joints may be damaged otherwise. 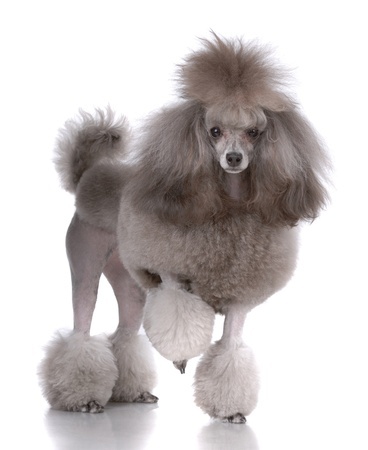 Poodles do not shed as much as other breeds but they do require regular cutting to keep them looking their best.

The fur never stops growing so this lovely dog can soon look very fluffy if you’re not careful and how you decide to cut the fur is up to you. There are several popular cuts for poodles, enabled by their hardy fur texture, and once they reach maturity it is advised to get these dogs a professional cut and clip three to four times a year.

If you’ve recently added a Poodle to the family, make sure you protect your new furry friend with Argos Pet Insurance provided by Pinnacle Insurance plc. Explore our Poodle insurance policies today.