Originally utilised as a watch dog by monks at monasteries in its homeland of Tibet, the Lhasa Apso is the forefather of most Terriers across Europe and its name means ‘fluffy lion’ in reference to its distinctive fur and personality.

The first breed of this dog was seen in Europe around 1922 in the company of explorers who had come from Lhasa, Tibet’s holy city.

Although the dog itself may think it is large in size, it only grows to 9 or 11 inches at the shoulder and is now more suited to its role of a companion dog, who will be loyal to its owner, their family and its home environment. 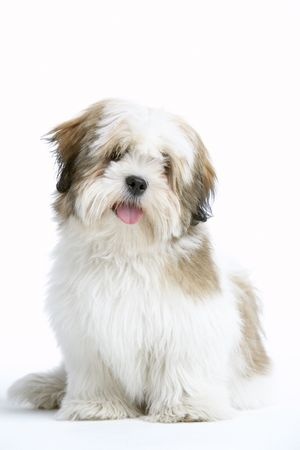 Whilst the Lhasa Apso is not an aggressive dog, they will fiercely protect their owners and treat all strangers with suspicion. That’s why the training stage of their life is vitally important because Lhasa Apso puppies need to socialise a lot in this phase, allowing them to bond with family members and reduce their natural tendency to be wary of people.

But, just like with any dog breed, the hours you put in at the beginning will be well worth it because of the joy and happiness their loyalty will bring you.

Yes, they may be quite lively and a bit stubborn too, but they do accept living with other animals very well.

A Lhasa Apso is also not as active as some bigger dogs can be, which means they are perfect for older owners or those who are unable to participate in long walks. They’ll be happy sitting in your lap on a cold, wet day and won’t play up if you can’t walk them one day for some reason. 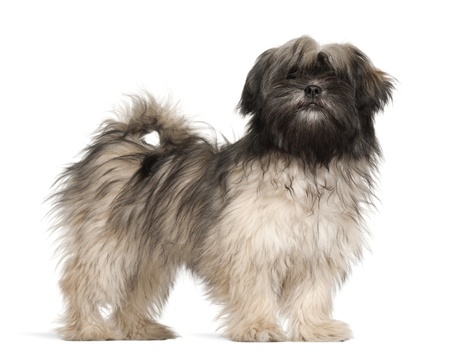 Small in size and with a long body, the Lhasa Apso has quite a big head for its stature and is known for its distinctive beard, whiskers and fluffy fur.

With a double layer of fur which covers the whole body, this dog will need brushing on a daily basis to avoid tangles and washing at least every fortnight to keep dirt and bacteria out of their eyes.

Obviously, keeping them groomed is very important to maintain their attractive fluffy appearance, but some owners do regularly choose to clip their coat short to reduce the frequency of this task.

Intelligent and independent, this dog would enjoy sharing their life with an active family, but if you are looking for a pet which is 100 per cent child friendly it breed may not be for you. Lhasa Apso do tend to nip when surrounded by clumsiness (which toddlers and young ones can sometimes be) and they have been known to bond better with adults. However, that’s not to say they won’t enjoy being in a busy family home with children of an older age.

Despite their small size, Lhasa Apso love getting involved in activities you’d normally associate with larger dogs, like hiking and running. But take control of them early on in their development otherwise they can be very demanding and try to show who’s boss during their expected lifespan, which can range from 12 to 20 years.