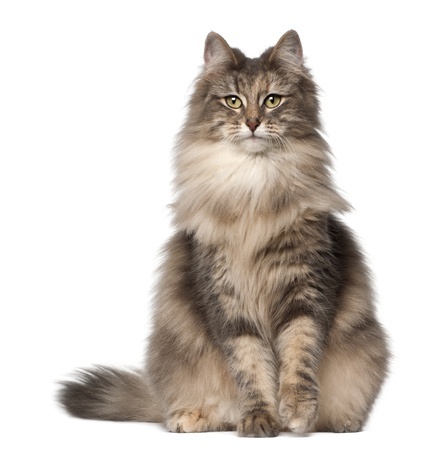 The exact origins of the breed are not clear, largely because of its age. Native to Norway, the breed dates back hundreds if not thousands of years.

Norwegian Forest Cats feature in Nordic legends, including being the chariot-bearer for the Norse goddess Freya. More recently, the Norwegian Forest Cat found homes in farms, where they would be referred to as “Skogkatt” and used to keep the local mouse population under control.

The breed was shown in Oslo, Norway, for the first time in 1938 but it was not until 1975 that the breed gained formal recognition with the European cat registry. In 1979, the first breeding pair of Norwegian Forest Cats was exported to the US and the type was was awarded championship status in 1993.

Norwegian Forest cats make adorable kittens and are popular because they take up to five years to fully mature.

Adults can weigh up to 10kg (about 1st 7lb) and their thick coat only adds to their presence.

The double fur varies in length, with a short collar flowing into longer hairs on the body and near the thighs.

The appearance is not dissimilar to the Maine Coon breed.

The coat appears in a large variety of colours, with and without white patches. The coat is designed for life in Norway, so is warm and water-resistant.

Likewise, the cat’s features are a clue to its natural environment – the ears have long, wispy hairs to deflect ice-cold winds, while the large, heavily tufted paws are perfect for treading on snowy ground. The back legs are longer than the front, making the Norwegian Forest cat an excellent tree-climber.

The Norwegian Forest cat’s personality is friendly, calm and gentle. They are intelligent and friendly and some have described the character as “dog-like”.

The cats are generally adaptable, inquisitive and bold. Norwegian Forest cats are really good with children and other animals, making them perfect family pets.

Although sociable, they don’t demand too much attention and are happy to be quite independent – they’re not always the best lap cats. Norwegian Forest cats are happy to dip their paws in water in search of food, so be aware if you have a fish tank or a pond in the garden.

While the cats love the outdoors, they are quite happy to spend quiet time indoors. Their alert, intelligent nature means they enjoy playing games and learning tricks and thrives in a busy family environment. Like many cats, they’ll usually develop a fondness for a particular toy.

Another distinguishing feature of the Norwegian Forest cat is the noises it makes, from a soft purr to bird-like chirps when he or she is excited.

Although the coat is long and thick, it is not too hard to look after.

Brush the fur twice a week, taking care to tease out any tangles so that you don’t hurt the cat. During the shedding period, it’s a good idea to increase the grooming frequency to three or four times a week to avoid knots or matting.

Bathing Norwegian Forest cats requires a bit of extra work, largely due to the waterproof coat. The coat develops a natural oil, which can be washed away with a specially selected shampoo. Every cat is different, so it may take a few bathing attempts for you to work out what suits your pet best.

It’s important to make sure the coat is thoroughly rinsed after washing and then there is the challenge of drying the fur. It’s best to let the cat dry naturally in a warm environment. Ideal places are in front of a fire or heater in the living room. If you prefer to use a hairdryer, take care that is not too hot.

Brush the cat’s teeth regularly and check the ears once a week. If the ears are dirty, clean them with a soft cloth or cotton wool ball – not a swab.

Keep the cat’s litter tray clean, to help ensure his or her coat stays fresh. Take a look at our range of cat accessories and find the perfect products to help groom and take care of your Norwegian cat.

There are a two main known health issues that exist in the breed. These are heart and kidney problems – but they are very rare.

The breed has also been known to suffer from hip dysplasia, a rare problem that affects the hip joints.

The lifespan of a Norwegian Forest cat is between 12 and 16 years.