These medium cats have pure white coats and bright colourful eyes – hence their other nickname, the Diamond Eye cat.

The breed is relatively new to Western countries, having only been introduced to the UK in 2009.

The breed’s history, however, dates back to ancient Thailand, where it originated alongside the Siamese, Burmese and Korat breeds.

The Khao Manee is mentioned in the Tamra Maew, a 14th century book of poems about cats.

The book referred to the breed as the Kao Plort, meaning “all white” and said it would bring “long life and title” to families it lived with. 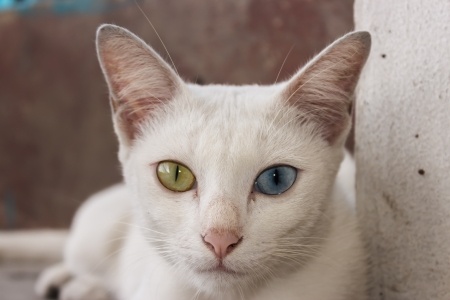 Khao Manee cats were favoured by Siam royalty, who for decades were the only people allowed to breed the animal and exporting the animal was forbidden for many years.

The breed was taken to the US in 1999 and was brought to the UK ten years later by breeder Chrissie Russell.

In 2010, the Khao Manee breed was recognised in the UK by the Governing Council of the Cat Fancy.

The Khao Manee kittens and cats are a medium-sized breed, growing to between 10 and 12 inches and weighing between 8 and 10 pounds. Khao Manee has a muscular, athletic body, with a wedge-shaped head and large ears. The nose is prominent with a blunt, rounded tip.

The white fur is short, sleek and close. The legs are strong-looking and well proportioned, while the medium length tail is broad at the base and tapers to a rounded tip.

Both eyes may be blue or a mixture of one blue and one green or amber eye.

Khao Manee kittens are sometimes born with a dark patch on the head but this will almost always disappear by the time the cat is a year old.

This breed of cat are very calm and relaxed, making them an idea lap cat. That is not to say they are boring. The Khao Manee is highly intelligent, with an extrovert and inquisitive nature.

It has a tendency to show off and uses its loud meow when it wants to attract attention. They are very sociable and love being around people, meaning they are great family cats. This does mean, however, that they do not enjoy being left alone for long periods.

Khao Manee kittens and cats appreciate the company of other cats, especially one that has a similar personality. They will get on well with other pets, including dogs and are likely to enjoy playing with a canine companion. 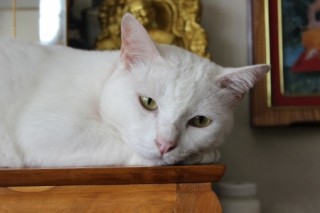 From a grooming point of view, Khao Manees are very low maintenance. Their short coat means only occasional brushing is needed to prevent matting and help circulation.

If rubbed with a chamois cloth, the coat will develop a lovely sheen.

Khao Manees hardly shed at all, making them a good choice for allergy sufferers.

They do, however, need plenty of attention, so be prepared to play and make a fuss of your pet.

You will need to spend a few 10-minute spells each day playing or setting tasks for your Khao Manee.

They also enjoy plenty of cuddles and following their owners around the home.

Khao Manee should be regarded as indoor cats. If the cat is to be a pet – and not used for breeding – they should be neutered at about six months old as the breed reaches sexual maturity at a relatively young age. Like with most cats, the breed needs regular vaccination boosters against common cat problems such as influenza and enteritis.

Good quality cat food will suffice, though Khao Manees also enjoy some of the finer things in life such as cooked chicken, fish and ham.

Drinking cows’ milk is not advisable as it will likely result in an upset stomach.

The breed is regarded as generally healthy but, because it has existed in the West for such a short space of time, the verdict is by no means conclusive.

Some breeds of pure white cats tend to be prone to deafness in one or both ears but it is not known how much Khao Manee kittens or cats are affected by this syndrome, if at all.

The life expectancy of a Khao Manee is from 10 to 12 years.