10 ways to look after your cat in the cold weather

It's important to take additional steps to look after your cat in the cold weather. Cats can ...

Snowshoe cats have been in the media since the launch of the Grumpy Cat and his rise to fame back in 2013. However, the scowling face and sad eyes of this cat is far from the true personality of a gorgeous Snowshoe cat.

The Snowshoe cat was originally named for their pretty white paws and dazzling appearance – originating as a mix of Siamese and American Shorthair they have now come into their own. The Snowshoe cats have an individual personality, with their high pitched purr and affectionate nature; they are always sweet and lovely to be around. 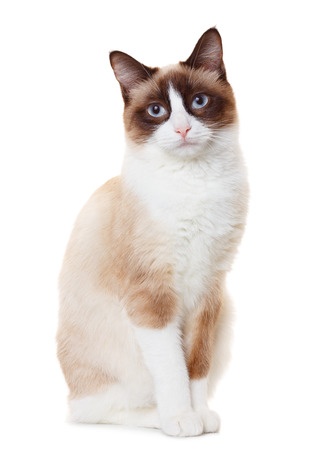 What is the appearance of the Snowshoe cat?

Very much like their ancestor, the Siamese, the Snowshoe cat has very pointed features, with a light coloured body with the legs, ears and tail being the darker areas. However, the body is more rounded than the Siamese, with much shorter hair. A “V” shaped white marking will also be found between the eyes and over the muzzle. The four paws will be white to accentuate the darker coloured legs – the front paws are normally known as “mittens” with the back ones termed “boots”.

Where does the Snowshoe cat come from?

The appearance of the Snowshoe cat we see today actually comes from the Victorian -era where we can find photographic evidence of Siamese cats with white paws. However, the breed we know and love today wasn’t actually born until the mid20th century.

The Snowshoe cat came around due to an American woman named Dorothy Hinds-Daugherty; a Siamese cat breeder deciding she wanted to “create” a Siamese type cat with white paws – these she named Snowshoe cats. She began with three white pawed Siamese cats and bred them with a shorthaired cat with a black coat and white belly and so the Snowshoe cat was born.

How big are Snowshoe cats?

The average size of a Snowshoe cat is between 9 and 12 pounds. Females are smaller weighing between 7 and 10 pounds.

The Snowshoe cat has very distinct personalities and is normally great fun to live with; whilst they may be occasionally bossy they are also the perfect companion. You can expect your Snowshoe to be intelligent, active and extremely affectionate. A Snowshoe is known to choose her favourite person in the family and remain loyal to them.

Due to their high levels of intellect they are known to learn how to open doors and even perform tricks – they love to walk on a lead and play fetch. In fact, they even like a bit of water sports so will always be keen to play in any running water. This is a very active cat, one which will often be found sat on the top of a bookcase watching everything that is going on.

Do Snowshoe cats have any health problems?

This breed of cat is generally healthy however you may notice a kink in the tail or cross eyes. This is purely cosmetic and is not a health problem.

How to take care of the Snowshoe

Because the Snowshoe’s coat is short and smooth, it will only need occasional brushing, so once a week is fine. Also, it’s important not to be alarmed if it feels heavy when you pick it up, Snowshoe’s are built to run and are extremely muscular so it may feel heavier than it looks.

The active Snowshoe cat is perfect for families with children and other pets as it is guaranteed to keep everyone on their toes.