A small breed which is popular throughout the UK, West Highland Terrier puppies and dogs have a distinctive look and are often called “Westies”.

Recognised by the UK Kennel Club in 1919, the West Highland White Terrier is part of the Scottish Cairn breed which includes other small dogs originally bred as hunters of small prey.

Their trademark white coats were specially bred in the mid-19th century when a breeder of other terrier types took white puppies from a litter and developed the ‘Westies’ line – an adorable nickname that they are commonly known for today. 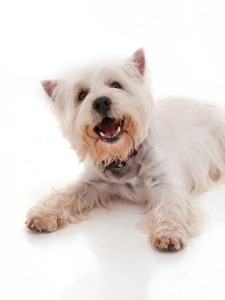 These little dogs are very attractive and sturdy. They have strong short legs and a thick white outer coat which covers a softer layer of fur. They have a muscly, thick body and short tail and pointed ears which always stand upright. Their eyes are dark and deep set, with an endearing furrow in between. A West Highland Terrier weighs 12-22lbs and stands 9-12 inches in height. Males are a little heavier and higher than females.

There is so much to like about these playful little dogs. They have a very friendly disposition making them ideal pets for families, couples or people living alone. They are equally happy in a house or flat as long as they are walked regularly.

Owing to their intelligence, they are quick learners and easy to train. They can be stubborn though, so owners need to be firm but fair. Despite their small stature, they make excellent guard dogs and are often very vocal when protecting their property. Although generally cheerful and happy dogs, they don’t usually get on well with smaller animals like hamsters, gerbils or smaller canines. One bonus is that, they are traditional vermin hunters so their presence can ease any issues with infestation of rodents.

Brave, inquisitive and independent, The West Highland White Terrier makes an ideal pet for many households. 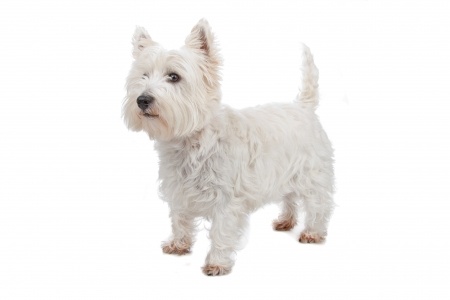 Westies love physical exercise so be prepared for regular walking. Anyone who is looking for an excuse to exercise will find this little dog an ideal companion. They’re also naturally curious so need mental stimulation too. They love playing with people and a good set of toys will be invaluable for owners. It’s worth noting that these dogs have a reputation for being snappy but this isn’t necessarily true. They simply need to be trained from an early age. Westies also adore digging so gardeners may want to provide their Westie with its own sandbox to protect their flower and vegetable beds.

West Highland White Terriers are generally healthy but do occasionally suffer from skin diseases and so need regular checks. As they age, they sometimes suffer from globoid cell leukodystrophy which affects body control. Owing to their wiry coats, Westies need to be groomed two or three times a week and trimmed every three months. Keeping the coat white may also be difficult in rainy climates and owners should be prepared to invest in decent grooming from time to time.