10 Tips to Stop Your Cat Fighting

For a cat lover, there’s little worse than a street catfight; claws out, fur flying, hisses and howls that are heard for miles.

Then comes that feeling of dread – was that my cat? Were they badly hurt? Or even worse, the fight is in your own house between two cherished pets, causing unrest, damage and pain in the sanctuary of your own home. 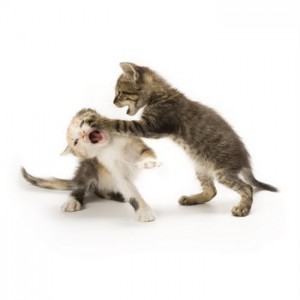 In either case, there are some simple solutions to help avoid the angst and torment of cats fighting.

Many cat fights are caused when introducing a new cat to the household, especially when the older cat has been in residence alone for most of its life. Socialising the cats can be done by getting them used to each other’s scent. Rub a towel over the new cat and show it to the older cat frequently for a couple of weeks before you fully integrate them.

If the above fails when introducing a new cat, try putting the new cat into a large cage. Allow the older cat to be in the same room while they become acquainted; they won’t feel so threatened with the bars separating them and should then be comfortable with each other once they are living together.

If a fight does break out, do not try and separate them with a hands-on approach as you will almost certainly suffer battle wounds. Instead make a loud noise by clapping near them or squirt water at them, then separate the offenders until they cool off.

Cats are territorial and a new cat in the home can be seen as an intruder in their territory. Try to create a separate area in the home for each cat, and rub his or her scent on a towel in the bed. This way they have their own space, and know where it is.

Meeting new people is the last thing we want to do as humans when we feel unwell. Cats feel the same so when you bring home a new feline friend, be aware of the health of any existing pets who may be agitated at a new cat trying to play. Try to pre-empt the problem and visit the vet beforehand.

Giving one cat an escape route is sometimes beneficial. Electronic cat doors are easy to install and set up, and are activated by a magnetic collar key, which is worn by the victim cat. This will stop stray cats entering the home as well as preventing your own cats fighting.

When separating a fight, it can be tempting to lure the cats away with an edible treat but this will only lead them to associate treats with fighting. Instead, try using a toy to preoccupy them and move them away. They may then associate the new cat with fun and toys, rather than fighting.

Using cat pheromones around your home will make your cats feel more relaxed with the sense that they are in their own territory. This should make them more at ease in the company of other cats due to the calming effect.

When you get a new cat without even realising it, you will give the new comer more attention than your other cats. Be aware of this and give your existing cats a little one to one time to reassure them.

If not already neutered, having it done can see a reduction in fights. Most cat-fights are caused by aggression between two males over territory and competition, so having your cat neutered should reduce this.

Other benefits will be the prevention of spraying around your home and the reduction of them roaming for days at a time. An unneutered male cat will make a difficult pet for these reasons.