The pixie of the cat world, the Devon Rex is well known for its oversized ears and mad personality. Many often refer to this breed as a cross between a cat, dog and monkey in personality, adding to its uniqueness. 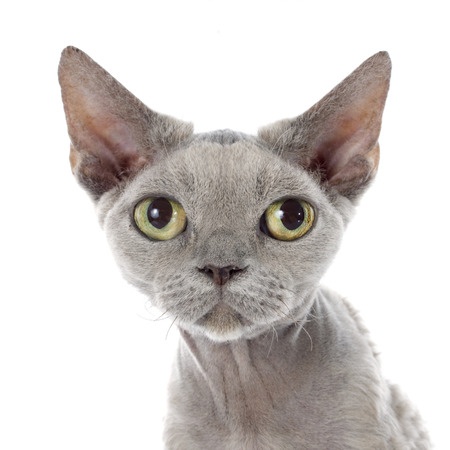 Delightfully silly and playful in their personality, the Devon Rex is interested in everything and everyone.

Their playful nature means that Devon’s have the ability to quickly learn tricks and are always up for a good game.

The Devon Rex breed dates all the way back to the 1950s when a very natural mutation occurred amongst non-pedigree cats in Devon. The very first Devon Rex was established when it was the only cat from the litter to be born with a curly coat; the litter was thought to be fathered by a large black stray cat with a ringlet coat.

The name Devon Rex was soon chosen for this new breed and a breeding programme was put in place so that families around the UK could enjoy the compelling personality of this lovable cat.

The Devon is known for its unique appearance and charming look, with their large eyes and short nuzzle accompanied by prominent cheek bones which make them look positively elf-like.

The Devon Rex is a small to medium sized cat with females weighing an average of 2 to 3 kilos with males’ weighing between 3 and 4 kilos.

While the Devon Rex may look fragile, it’s actually an extremely agile and muscular cat.

Perhaps the most striking feature of this breed is the coat which is often short and rippling which can come with either a slight curl or kink. Due to the small amount of fur that this cat has, the Devon Rex is often considered a low allergy breed – making it the ideal companion for anyone allergic to fur and also for asthmatics.

The Devon Rex is known for its alert and active personality – this one most definitely isn’t a passive breed! Devon’s love being around their human owners and enjoy the occasional game of catch and will often be found exploring their surroundings.

This breed is often considered the best pet for working families as you won’t come home to a torn up carpet or a ruined home as the Devon Rex always finds a way to keep itself entertained and busy while its owners are away.

Like dogs, the Devon Rex is known to follow their owners around the home from room to room and will likely jump onto your lap whenever it is given the chance. Owners of this cat will find the breed extremely loyal, loving and affectionate.

If you’re thinking of purchasing a Devon Rex, it is important to ensure you have the lifestyle and time to dedicate to it and only buy from respected animal sellers or people you trust.