Korat cats and kittens are one of the most established and purest breeds.

Originating in Thailand, Korat cats share some similarities with Siamese cats but they are more rare and, therefore, more highly prized.

Regarded as an ancient and natural breed, breeders maintain standards with a strict policy of no out-crossing.

The name comes from Korat – the north eastern province of Thailand. 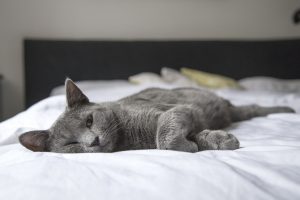 Adult Korat cats are renowned for their beauty, particularly their large, bright green eyes set in a heart-shaped face. The solid, even blue coat has a hint of silver, giving the fur a luxurious sheen.

In rare cases, the coat features faint white or grey markings, which can grow as the cat gets older. These are seen as flaws and are not permissible in show cats.

However, Korat kittens are less attractive. They are slow to mature and go through an ‘ugly duckling’ phase of having a dark, fluffy coat and amber eyes.

It takes three to four years for Korat cats to fully mature. Fully grown Korats are small to medium, but have a solid and muscular build and are deceptively heavy – usually about 6lb to 10lb.

They might look like perfect decorative pets, but Korat cats are highly sociable and need a lot of interaction.

Korats are intelligent, lively and playful and demand a lot of attention from owners. Perhaps not as vocal as Siamese cats, but they will let you know when they want something.

They enjoy playing games, such as fetching toys and show problem-solving skills if set a challenge. While they are active, Korat cats are not overly hyper and will happily sit on a lap and be fussed.

They’re good with other pets and children, so make excellent family pets.

Because of their relatively short fur, Korat cats are fairly-low maintenance.

A brush through once or twice a week will usually suffice, unless the Korat is shedding its winter coat, when daily brushing might be needed.

For the rest of the year, though, Korats shed minimal amounts, meaning they make good pets for people who suffer with allergies.

Brush the Korat’s teeth regularly and check the ears once a week. Clean the ears with a soft cloth or cotton wool ball. 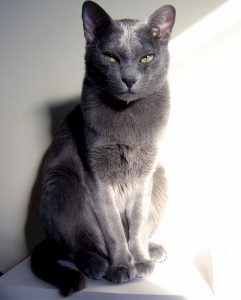 Its pure pedigree and long history have helped the Korat become a hardy breed, with few health problems.

One know genetic disease known to affect Korat cats is Gangliosidosis, also known as lysosomal storage disease. The problem affects the nervous system and can affect how the cat walks and sometimes results in involuntary sideways movement of the eyes. Cats with the disease typically do not live beyond their first birthday.

A test was developed to identify carriers and the disease is thought to have been eradicated in Korats. Check the test has been carried out before you adopt a Korat.

The life expectancy of Korats is about 15 years but some have been known to live into their early 20s.

The origin of the Korat breed is in Thailand, where it is known as the Si-Sawat – meaning “colour of the sawat seed”.

The Korat is thought to bring good luck and, traditionally, is given to newlyweds. Only in recent decades have Korats been available for sale – they were previously only given as gifts.

The first record of the Korat is in the Tamra Maew, a book of Thai cat poems, compiled between the 14th and 18th century.

Unlike Siamese cats, which were favoured by Thai royalty, Korat cats were owned by common people, who perceived them to bring good luck.

It is thought Korats were brought to Britain in the late 1800s under the name ‘Blue Siamese’ but quickly disappeared having not conformed to show judges’ perceptions of a Siamese cat.

According to the Korat & Thai Cat Association, the breed was reintroduced in the UK in 1972, with championship status from the Governing Council of the Cat fancy coming 10 years later.

The Korat & Thai Cat Association says: “The Korat of today is just like its ancestors in ancient Thailand, in fact the breed is one of the least altered by modern breeding.

“In temperament the cat is very ‘person oriented’, which means they like to be involved in their owner’s activities.

“A typical Korat will be seen with its nose in the hole you are digging (such a help), many love to travel in cars and some insist on going everywhere with their humans.”